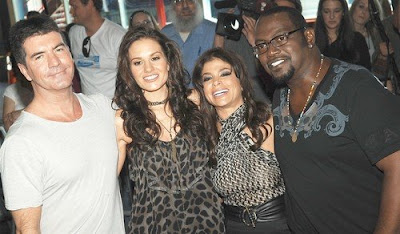 You know the bikini incident reminds me of when you dolls mix it up on Althouse. Why can't you ladies get along. Hee, hee.
The goal in the early going is to stand out, but not too much and not for the wrong thing.The bikini girl got a lot of camera time but will be out right away in the next round because she can't sing.And she ain't that hot. Too skinny.
The first Afro guy was scarey bad. And I couldn't decide who he reminded of more: Oscar Gamble or the Wild Samoan's.Of course they sing a lot better than him.
The sorta blind guy was kinka milking it though.
Hey Madonna called. The Mossad bodyguards she has are not enough. She wants Zach and Titus to join her security detail.
Hey did you see when they said they had a roughneck that like to drill pipe up next, Paula got all excited.As did Seacrest.
Man when Seacrest got kissed by the bikini girl he looked almost as uncomfortable as John McCain standing next to Sarah Palin. Almost.
The new judge is the daughter of a former congressman. So we know she knows how to take a bride.I hope they check her freezer.
Every year Randy looks more and more like Idi Amin. Not that there's anything wrong with that.
Paula's wearing glasses. She thinks it makes her look smart. Good luck with that one.
One of the guys looked just like Eddie Munster. Or Loafing Oaf. I am not sure which.
Is the girl in pink destined to off herself in a judges driveway in ten years?
The girl that sang "At Last" has an extremely big head. Which is very good since most popular actors have heads out of proportion to their bodies.But man she had a forehead of Klingon proportions.
You know I would have given Seacrest ten bucks if he would have thrown the sort of blind guy in the pool.
Wouldn't it be cool if Simon asked the next contestant if they paid the social security taxes on their nanny?
Don't you think that the southern girl whose family couldn't make it has some relative in jail? "My mama would have been here but she is doing a two year bit in Angola. This is for you momma!"

I think the personality girl who couldn't sing but did the calisthenics in the waiting room had spent too much time hanging around with Coach Reed's kids. (That's for you AJ).
I hope nobody brings a new born baby like they did last year. Because Paula might try to kill the mom and steal the baby. Just sayn'.
One good thing. It looks like Simon got control of his nipples this year. Or maybe the air conidtioning sucked in Arizona.
The sort of blind guy has a problem because his brother can’t come to Hollywood because he has to work. So they are going to get him a dog. The timing should work out fine since Hillary’s hearing are going well so Chelsea should be free in time for Hollywood week. What we can only make fun of Palin's family?
I think the girl they pimped in the first spot will be out in Hollywood week. They usually don't show their hand so quick and you really don't see a lot of the real contenders in the first few shows.
Hey they say that Castro's brother is in this year. No not Fidel's brother, Jason's the dreadlocked pot head guy.You think with all the money their family made inventing the convertable sofa they would give somebody else a chance.
Posted by Trooper York at 12:52 PM

Plus Paula's tits have got kinda saggy.

Ever get the feeling Simon can barely conceal his contempt for us dumb Yanks?

Haha, you are on fire today, dude. Listen, I might be wrong, but I think that they do more than two years at Angola, like maybe life. It's a max-security can.

My kids went to the rodeo in October. None of those silly fuckers on AI were bull riding. Seacrest was voted 'most likely to be ridden' by the inmates.

Well I kind of have to give Simon a pass. I mean he is with Paula and Randy which is not exactly the best that America has to offer.

Bull riding sounds like a fun event. They just had it at Madison Square Garden and it sold out.

Don't forget to vote in our new poll.

"Plus Paula's tits have got kinda saggy"

Noticed that. Looks like the dreaded boob imbalance, form the photo at the top of the post.

'K. Well, yeah, she needs a little support there, that's all.

I need to start watching AI again. If it's true that there won't be as many really awful/crazy contestants at the beginning though, that's kind of a negative.
They were hilarious.