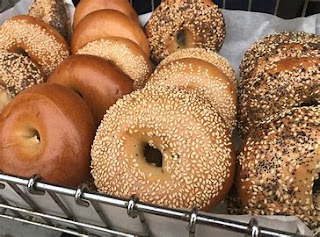 Anna Feola walked into the Brooklyn Loaf to start her shift at 6 am. Just about five feet tall she was slim but shapely with dark brown hair with auburn highlights. Anna looked like an Italian neighborhood girl even though she came from Suffolk County. She fit right in on Court Street.

Anna was always one of the first employees at the store because she liked the first shift. First of all, it was always busy so she was always moving. Anna hated having to wait around with nothing to do. Best of all she got off early at 2 o’clock so she had the rest of the day to do whatever she wanted. She could take a class or go to an audition. Or even just help out the nice old Italian lady that was her landlord. She was like her Mom. Or more like the Grandmother that she had never had back home. Her family originally came from this neighborhood even though they had moved out to Long Island back in the sixties. Even so she felt a prosperity interest in the Italian culture that was fading away in the face of all the hedge fund managers and Wall Street aholes who were buying up the neighborhood. There were still a few pockets of the old Italian American Immigrant culture left and this coffee shop was one of them even though it was only about ten years old. It featured bagels and rolls and prepared sandwiches with coffee and tea. Not fancy like Starbucks but not as declassee as the Dunkin Donuts on the corner of First Place. It was sort of in-between. Just like Anna.

She started the coffees in the giant urns and Pepe brought up a couple of paper sacks filled with fresh hot bagels. She sorted them out and put them in the wire bins designated for each flavor with a little ceramic name plate attached to the front. Plain. Salt. Poppy. Sesame. Onion. Everything. A bin for everyone and a pile of hot steaming goodness. If only life could be like that.

People started drifting in. Moms on their way to PS 58 to drop off their little monsters. Nannies with their over privileged charges in super expensive strollers. A couple of in a hurry commuters who wanted to pick up something to take on the subway. The crowd grew and the line went out the door into the street. She poured the coffee and buttered the bagels and even had to serve the one section of tables against the wall. They were easy as they were usually her regulars. The same people every day.

One of them was an older Italian gentleman with hard eyes and pure white hair. He was always elegantly dressed in an expensive leather jacket and a silk shirt. He wore expensive custom-made shoes and had a Rolex on his wrist that was worth more than everything that was in the whole shop. He wore dark glasses inside and was very quiet. Occasionally someone from the neighborhood would come and whisper something in his ear. He would nod or make a gesture with his hand or very infrequently whisper something back. His order was always the same. A cup of espresso and a plate of Italian biscotti. He never varied it unless he wanted a short snort of anisette in his coffee. They kept a bottle behind the counter just for him. He was always very kind to her and there was always something mysterious about him. Anna didn’t know much about him and was sort of intrigued.

What she really didn’t know was that he was the real owner of the joint.

You see the Mob had gone into the bagel business in a big way in the 1980’s. What’s not to like? A cash business perfect for washing money. And you didn’t even have to lose money at it to boot. So bagel stores went up in Bensonhurst and Kew Gardens and Staten Island and Ozone Park. There were two in South Brooklyn that now had the Real Estate name of Carroll Gardens. One on Smith Street was controlled by the Columbo’s and was full of cowboys. They ran guns and drugs out of it and a bunch of them got pinched and put away on a Ricco charge. This one was much cleaner. They kept the drugs and the guns and gambling out of it. It was just bagels and a schmear.

At one time the cafes in the neighborhood had been part of the fabric of their existence. People would come in and sip an espresso and talk. It was a social thing. That’s why they were called social clubs. You knew everyone and everyone knew you. Now it was like the rest of New York. Anonymous and lonely. Sometimes people might know each other and nod before they became engrossed in their phones. But most of the time they just stared at their laptops or phones as though they could find the meaning of life.

He came in around eight this morning and sat in his usual seat. The second table from the front with his back to the wall. Anna hurried over with his order. “Good morning Mr. Aiello. Here is your breakfast. How are you feeling?” she chirped as she put down the plate. “Great sweetheart” he rasped with his heavy Brooklyn accent. “Just great. Can youse bring over the papers when you get a chance.” “Yessir right away.” ”Thank youse.”

When he asked for the papers, he only wanted the Post and the News. He never touched the Times or the Wall St Journal. Tabloids were all he read. Oh well the rest were there for all the pretentious noobs who came in and hit on her. But they wouldn’t be here for hours yet, so she was safe. Maybe she would have time to practice that song for the audition she was going to hit next week. She just hoped that Mrs. DiMartino would be okay with her singing the same song over and over for hours. What was she thinking? Of course, she would be fine with it. But she was going to bring her a bag of Italian cookies just to make sure.

She had learned her lessons well. She was morphing into a real neighborhood girl.