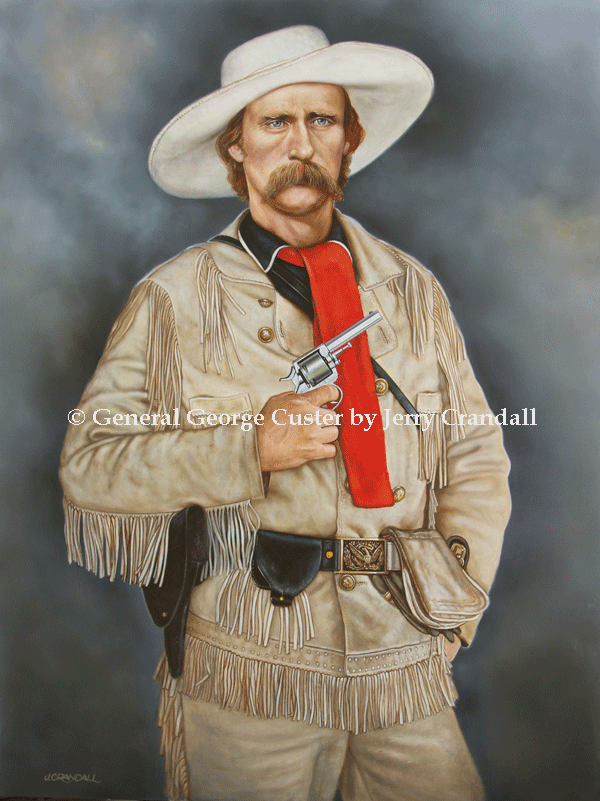 General George Armstrong Custer walked into the hotel room in Washington and the notables gathered therein jumped up as though Jesus himself had entered. They looked at his as Jesus since he would have to save them. Because he was the only hope the Democratic Party had of winning the Presidency in the upcoming election in the centennial year of 1876.

The only potentate who did not rise was the nominal canid ate Governor Samuel J. Tilden of New York who had been selected by the convention to carry the banner of the Democratic party. A handsome individual in expensive clothing with a diamond stickpin in his cravat he looked at the strutting gamecock with a jaundiced eye. He had been designated as the candidate by the convention but the party bosses wanted to what you should never do. Change horses in midstream. They wanted to replace him with the Hero of the Battle of the Little Big Horn.

Bayard and Thurman who had been among the bitter rivals that had contested the nomination were leading the charge. Even Hendricks who Tilden had taken on as his Vice-Presidential nominee was in on the attempt to steal the nomination. The only one who refrained was General Winfield Scott Hancock who thought if a general was to be the nominee it could only be him.

The problem was that the “soft money” contingent led by John Kelly from his own state of New York wanted to abrogate his victory and turn to a successful general to combat the dominance of the Republican Party ever since the War Between the State. They wanted to flood the nation with greenbacks instead of going back to the gold standard that Tilden embraced. This strutting peacock would be their puppet in this since he knew about as much about economics as a dog did about Latin. It is the rest of the duties of a President that would be the rub.

“Gentlemen thank you for inviting me to meet with you today. I have just arrived from the Dakota’s where we put paid to the savages as you well know.” Custer stood tall in his fringed buckskin jacket and battered felt hat like he had just ridden in from the battlefield. He was a theatrical presence of that there could be no doubt. He couldn’t even appear in his correct dress uniform. If these idiots thought they would control this vainglorious lout they had another thing coming. There was no doubt that he would take them into another war.

“Please sit down General and we can put our proposal to you.” John Kelly motioned to a seat in the middle of a circle of chairs that had been set up for the group to discuss their plans. It seemed that the New York Tammany Hall ward heeler had been chosen to be the spokesman for the group. Which was bad news for the Governor since his bitter break with Tammany Hall had poisoned the well. Now the Sachem would have his revenge by stealing the nomination.

Senator Bayard of Delaware took up the torch. “General we are faced with a conundrum. You know the efforts the party has made to break through the prejudice that the nation feels towards our great party because of the late unpleasantness. General Grant has run his course and is not the candidate. We need a general of our own to compete and we need someone of your demonstrated bravery and competence to once more lead the charge.”

General Custer sat back in his chair and asked the obvious question. “I am sorry but I thought the convention is over and Governor Tilden has accepted the nomination? Or have I been misinformed?” Tilden leaned forward and said “Yes there is that Bayard.” “Now Samuel you know that we have discussed this. A unanimous vote of the committee can allow us to change the nominee. We have the votes. I had hoped you would acquiesce. For the good of the party. For the good of the Nation. A General especially a hero of both the War and the ongoing conflict with the Indians would be a far easier matter than a mere governor. Sorry to be so blunt but there it is.”

Governor Tilden was incensed at the caviler treatment of his candidacy by this cabal of fat cats and corrupt politicians. A reformer who fought the good fight, he was not going to surrender without a fight. “I was fairly elected as the Democratic Candidate for President and I have no intention of stepping down.”

General Custer turned to look at the group and did not say anything. He was here at their invitation and knew enough to be discreet. Finally, a voice in the corner spoke up.

“You have to realize Samuel. They have the votes, and they are determined. If you try to fight it you will lose and maybe sink any chance we have of finally defeating the Republicans,” said Horatio Seymour which was a stab in the back. Tilden had managed his campaigns including his losing” campaign for President. For Seymour to tell him there was no chance meant that it was true.

“Et tu Horatio,” Tilden sighed. “I will not stand in the way of the party. We need to defeat the Republicans at all cost. We cannot let their continual subjugation of the South to continue. If we do, we are in danger of the hostilities breaking out once again. But I learned long ago not to buy a pig in a poke. We need to ask the General what his plans are since I am not aware of him ever announcing them to the public at large.”

“That is a very astute observation,” Senator Bayard said quickly. “General if you are to be our candidate can you share you views with us.”

General Custer looked quizzically at them and said, “Does that have some effect on getting the nomination. I would think my views were well known. Otherwise, why offer me the nomination?”

Congressman Kelly leaned forward and said, “Indulge us general if you would. What is your plan for the savages and the settlement of the frontier?”

“I intend to go forward as we have now. I did not kill Crazy Horse to surrender to the dictates of Philadelphia sophisticates who weep for the red man. They will submit or they will perish. It is as simple and brutal as that. The West must be opened for the white man, and I am the one to do it. I know the Army and I know the red man and I will finish the job just as I broke the Sioux at Little Big Horn.”

“That’s fine as far as it goes. What about monetary policy?” asked Senator Bayard. “Are a gold standard man or will you support continuing the use of greenbacks to maintain our economy.” “I expect to be guided by you and others in the party in these matters, since you have the experience and knowledge to tutor me in this respect. I anticipate not making any changes in the near term unless the situation calls for it.”

Bayard and Thurman looked at each other and nodded. That was the key. The rest didn’t interest them all that much.

Tilden decided to stir the pot. “I understand you had some trouble when you were in Texas in the early days of Reconstruction. What will your policy be towards the Southern states?”

“I intend to integrate them back into the nation as expeditiously as possible. I have a plan to that effect.” “Really,” Tilden said. “What might that plan be?”

They were all nonplussed at the one-word answer. “War? With who?” sputtered Congressman Kelly. “With the South again? That would be a disaster.” Custer smiled. “No not with the South. They will be fighting with us this time. The marital spirit of our Southern brothers will be ignited and it will unite the country as we march shoulder and shoulder. It will heal our wounds to fight together instead of fighting each other.”

“War? Seriously? Answer the question sir if you please.” Tilden demanded. “Who will we declare war on to unite the nation? Mexico? England? France? Who?”

Custer smiled a knowing smile and said, “Why I don’t think it much matters Governor. But my preference would be Spain. I think Cuba would make a great addition to our nation. It will be easy and bring us all together. That in short is my plan. Take it or leave it.”

The group all beamed in unison. Except for Tilden who hung his head in despair. The rest were jubilant. They had their man. They had their means to unite the South and bind them back to the nation. They had the chance to profit in a war footing as they printed more greenbacks. What could be better?

They had their man.