Why did they have to do that? 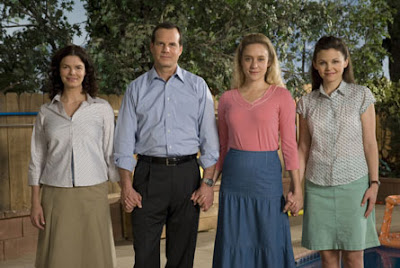 I was watching Big Love last night and they had a long segment of a Mormon ritual including a representation of the "Temple" which is the holiest of hollies in the Mormon religion. Now I am not a big fan of Mormons and it doesn't really affect me very much. But I had read how a lot of Mormons were very upset about their rituals being depicted this way on TV. I don't think that is the right thing to do. The tenets and practices of a religion can look strange and even foolish to non-believers. They are entitled to be treated with respect and not be the subject of a television drama that so cavalierly splashes them all over the TV in a melodrama. Now this will pass without a murmur and the usual suspects who complain about racism and sexism and every other ism will laugh if you told them they should support the Mormons protests. Because some people are OK to mock and abuse. Personally it made me uncomfortable and I don't think it was right.
Posted by Trooper York at 11:17 AM

Hmm. I've looked at many pictures of the Hollies and try as I might, I can't figure out which one is the holiest.

They look pretty clean cut, especially in the early part of their careers. Can't tell whether they are Mormon from the pictures, though. Not that there's anything wrong with that.

I agree completely. Back in the early 1980s, I saw a '60 Minutes' segment on annulments in the Catholic church. I knew within a few seconds they were full of shit. And I asked myself, 'Could they be lying about everything else, too?'

I figured the answer was yes, and I haven't watched it since then (it was a favorite).

Mocking faith is their usual stance, so I am not surprised. But I would have a modicum of respect for them if they had the balls to do this about any non-white-majority religion.

See what happens if they mock Christian Hispanics or Arab Muslims. Ain't gonna happen, the pussies.

@Pogo - 100% on the money. It's been open season on Catholics for decades now, and on people of other faiths also, but not with the same vengeance as directed at Catholics.

When's the last time you saw a TV program of a movie or some media fool lash out against an AME church, for example. Never, because that would be 'insensitive'. Bullshit.

And condemning Islam? Never gonna happen, no mater how many women are beheaded by their men. NOW has gone fully missing on this one.

Obviously the holiest of hollies is a long cool woman in a black dress.

The skankiest of hollies is Holly Hunter in Saving Grace.

Obviously the holiest of hollies is a long cool woman in a black dress.

There are just some songs where the first few bars of music are so distinctive that they are iconic.

Long Cool Woman in a Black Dress is one.

Brown Sugar by the Stones is another.

Why do they do that? Denigrate Catholicism and Mormonism? Because they can. Mormons are whiter than mayonnaise and therefor fair game.

I thought the holiest of the skanky hollies was Holly Golightly.

Mormons are white, square and won't cut your head off if you insult their religion. So it is all win-win as far as the msm is concerned.

Do you ever get to see Chloe Svegney's tits in that show? She is hot.

I loved her in that Brown Rabbit movie where she blew that guy. That girl knows how to suck a dick.

I was on the same plane with her once going to Vegas. I kept whispering really loud from behind my hand "BROWN BUNNY!"

She would whip her head around to see who was doing it. But then she went to bathroom and got high for the flight and didn't give a shit anymore.

Now, now I didn't say I knew her. I just made fun of her. Everytime I get on a flight to Vegas there has been a famous person in first class. The wife insists that we use our miles to fly first class because she hates to fly. The last five times we saw in order: Latoya Jackson, Ernie Borgnine, Joan Rivers, Chloe Svegney and Robert Patrick the Terminator guy.

A lot of people seem to go to Vegas from New York.

Troop knows more famous people than I do!!

But yeah, I thought it was tacky when I heard about it. Haven't watched yet.

It was kinda like that Woody Allen movie about Sex when all the sperm where waiting to go out. It seemed very strange. I can't believe that this is what it is like for them. It just was very uncomfortable.

Maybe the holiest of the hollies is Buddy Holly. Sainted, at the very least.

I consider Mormon theology to be heretical. But like you, it does not feel at all right to expose and ridicule their private exercise of their beliefs.

I had nothing like that kind of reaction when South Park went after the Scientologists though. That was fun!

Trey - who is such a hypocrit

She must be pretty hot in person, correct Troop?

Also, she has a big mole right by her nipple. She has been topless in many movies so of course I have seen that mole.

Still, she is very hot. Sexy, really. And definitely naughty.

She must be pretty hot in person, correct Troop?

Also, she has a big mole right by her nipple. She has been topless in many movies so of course I have seen that mole.

Still, she is very hot. Sexy, really. And definitely naughty.

I say it's fair to mock and depict those crazy fucktards however you want. Free speech. If you don't like it, don't watch. If you don't believe it to be accurate, investigate the "religion" for yourself and see what they're all about. (Hint: it started when some 14-year-old lunatic claimed he was visited by God.)

Oh I know I don't have to watch it.
I just didn't want it to pass without mentioning it. I know tolerance is a one way street and hate wins out every time. Most people can't see the other persons point. It can be Mormons hating on gays or gays hating on Mormons. Its par for the course.

I just think you just lose your sympathy card when you pull out all stops in the hate express lane.